Wow. It has been quite a momentous election cycle. What initially started off as an anxiety-inducing race ended with a major political upset and a shining moment in history for women. Kamala Harris has become the first black and Asian female Vice-President of the United States. In addition to breaking race barriers, Kamala serves as an exemplar for all menopausal women. Prior to the election, she served a long and distinguished career as District Attorney, Attorney General, and US Senator of California. Her ascent to the Vice-Presidency is a public rejection of the stereotype that menopausal women can’t be leaders.

Although Kamala is the first woman to sit in the Vice Presidency, she is not the first to run for the White House. Her predecessor, Shirley Chisholm, ran for presidency as the first black and female major-party candidate in the 1972 U.S. general election. She was also the first black woman to win a seat in Congress. Shirley was in her prime and 48 at the time of her presidential campaign. Her prowess, eloquence, and graceful leadership in her long political career cast aside doubts of her ability during her 14 years of service in the House of Representatives. Shirley fought tirelessly and fearlessly in the pursuit of social justice and educational opportunities. As one of her most famous quotes aptly summarizes: “We must reject not only the stereotypes that others have of us but also those that we have of ourselves.” Her career was spent fighting, breaking the glass ceiling for women in politics, and challenging her male critics. Shirley is yet another example of the rejection of stereotypes of black and menopausal women, and a political ‘shero’.

Both Kamala’s and Shirley’s triumphs show that menopausal women can and should be placed in positions of strength and power. When women, both young and old see them, they can now see the infinite possibilities laid out before them. These women have accomplished a feat that few have attempted or succeeded in — and paved a new legacy for all that follow after them. Too many times, society has implanted the idea that older women are capable of less but both these women’s marks in history are defiant of that outdated notion. Pause and let that sink in: Going through the change does not affect leadership ability. If anything, being able to lead while experiencing the effects of menopause is a sign of resilience. In spite of the emotional and physical turmoil we experience, as women, we can persevere and thrive in anything we put our minds to regardless of age.

Going off the momentum of last week, I think a great journal exercise for this week is to write down what you are capable of doing using the “I Am” statements. This written physical reminder will help set positive intentions and direct focus towards this week’s goals. Below are some of my positive affirmations/vows to myself.

#1: Each day your dreams are experienced by those you love.

#2: Each day you are full of visions of passion that keep you keeping on.

#3: Each day you walk the steps of a living legacy, your path is making a way for the current and next generation.

I would love to know, what are YOUR affirmations. How do you defy negative stereotypes and show yourself kindness?

Have a wonderful and purposeful day.

Going Thru The Change 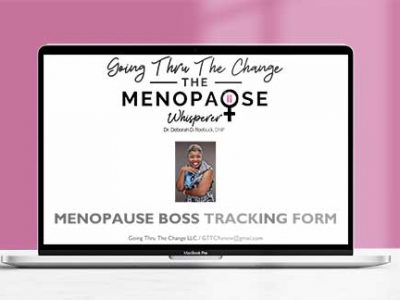 Does the occurrence of the signs and symptoms of menopause feel like an uncontrollable mystery to you, your employer, or family and friends?